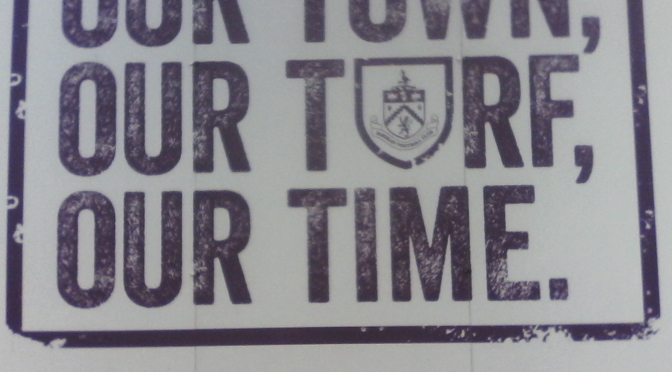 I cannot remember who we played the first time I went to a game & don’t even remember who scored. I was very little & just stood with my mate, Kevin Waring, not seeing much but hearing a lot of noise. Then I got to the front of the Bee Hole end, up against the barrier that stopped you from falling onto the pitch, & looked in wonder at the different sections of the ground. The Cricket Field stand was straight across behind the other goal, the brand new Bob Lord stand was to my left & people were in their seats, but my eyes were always pulled to the Longside stand. It seemed huge, with a roof on & one fence down the middle. The away fans were on the left side of the fence & on the right side stood the Burnley fans, packed in like refugees. You could walk from the Beehole stand all the way round to the fence. My eyes were always fixed on the fence & the two sets of fans on either side of it, their arms in the air pointing at each other, singing, chanting, swaying down in a wave effect. I was fascinated.

Being fortunate enough to be born in the Lancashire town of Burnley I am the proud inheritor of a football club with the greatest of traditions. The town’s populace has been devoted fans from the off, their club being one of the founding members of the Football League, & together they have embraced every pleasure the game can invoke. Burnley FC has won each of the four divisions, lifted the FA Cup & as champions represented the country in Europe. On the flip-side, the Clarets have been defeated cup finalists & championship runners-up; then relegated numerous times including a plummet to the depths of the old Fourth Division when only a last day victory prevented us from falling out of the league altogether.

Burnley Football Club is in my blood – well, if you’re from Burnley it just has to be. I bleed Claret & Blue. My first ever match at Turf Moor was a 7-0 drubbing of Rotherham United, & since that fun beginning watching the Clarets has supplied me with a plethora of feelings & emotions. I remember one time going to an away game on my own at Selhurst Park. Burnley won 2-1, & on the train to the South Coast, where I was living at the time, I met a fellow Claret & we got chatting. The crux of the conversation was that, however Burnley were doing at the time, it mattered; & each result affected your week. No escape. I also remember overhearing some Palace fans leaving the stadium pipe, ‘I can’t believe we lost to those,’ & there is something about Burnley’s place in the Football world that many cannot understand. A small town club like mine should not be meeting the football aristocracy on a level playing field, but the season just gone has re-secured our place in a game we practically invented. So with burgeoning pride I have turned the club’s history to verse, bound intrinsically with the famous terrace chant of my fellow devoted: ‘No Nay Never No More!’